Oftentimes in literature we read about building character. That which doesn't kill us only makes us stronger. I think I might be a mighty woman of fierce character; at least I should be after successfully surviving forty winters in North Dakota. 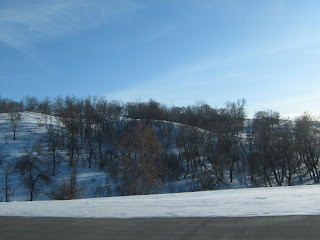 These are the weeks in January when the temperature plummets below the zero mark (f). The wind blows with dangerous windchill factors. Yesterday the windchill reached -46 degrees (f) in Grand Forks, North Dakota. My hometown of Parshall, North Dakota holds the state record of -60 degrees (f) - February 16, 1936. It is my belief that it was a windchill factor and not the actual temperature...at least I hope not.

Winter in North Dakota offers several opportunities for character building. We don't have 'black ice'. Oh, no. North Dakota ice is bold and brutal at the same time. You can see it. You know it's there and that is when you develop mad driving skills that astound the non-Dakotan drivers worldwide.

Two days ago I was outside, briefly, with a co-worker and when we went back inside I felt a slight burning sensation on my face. Yep, I froze my face. I guess they really do make scarves for more than an accessory. This is most likely why my grandparents made a hat AND scarf for each grandchild every year.

The Discovery Channel could do a whole documentary on survival of the fittest in a North Dakota grocery store before a blizzard. Those who have wicked mall shopping skills don't have anything on these ladies. It's not about getting the best deal, it's about getting everything you need in the shortest amount of time possible. Bread, milk, eggs, cheese, coffee, tea, candles, matches, flashlights, shovels...oh the shovels. If you see a lady carrying a shovel beware - it's not just for removing snow; she probably has a black belt in shovel wielding.

The simple act of walking out your front door can also be an act of character building. First, you have to devise a method of removing the snow on the outside of your door so you also can be outside. Once that's accomplished you must have the physical stamina to traverse through snowdrifts three to six feet high. Apartment living is not necessarily the solution to this problem as one must depend upon the moral fortitude of the landlord to remove the snow in a timely manner.

The most perilous form of character building in North Dakota is cabin fever. It's not the kind of peril those in the movie 'Cabin Fever' encountered. It is the peril of living on the edge of insanity. Days and weeks can go by where the temperature is so cold you have no real desire to be outside, but you can't stand being inside either. You spend days hurrying to your car and from your car to the warmth of your desired destination; and back again. My only solace for cabin fever is when I write. I create a world of warmth and activity - if only in my mind  - to alleviate the monotony of the days. Of course, cabin fever has built some very interesting characters over the years.
Posted by Unknown at 10:24 AM