Never Stop Believing in the Magic of Love 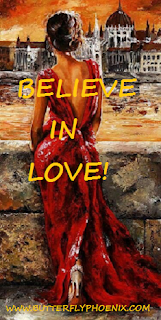 “There comes a point in many people's lives when they can no longer play the role they have chosen for themselves. When that happens, we are like actors finding that someone has changed the play.” ~ Brian Moore, Author of The Lonely Passion of Judith Hearne

Fifty-three percent (53%) of adult American women are single today. That’s rather shocking compared to the turn of the last century when that number was less than 20%. It used to be that most women were married by the time they were 20 to 22 years old; not anymore. Today, many women are putting off getting married until at least age 27.

As I was doing some research on this post, I started to think about all the information that I was obtaining about the benefits of being single – all of them are tangible reasons to be single, except the part of being free to do whatever we want, whenever we want.

One of the saddest books I have ever read is The Lonely Passion of Judith Hearne. Why would a book have that sort of effect on the reader? I think that it has a lot to do with the aging process. When we are young and free to be whomever we choose, having someone to come home to at night or not isn’t really all that big of a deal. However, when we become women of a certain age, the play has changed and we actresses aren’t necessarily choosing our own roles anymore.

The apartment or house seems a bit bigger and emptier as the years pass. All the beautiful things that fill the home appear to be a bit less shiny than they once were. They seem to be of less importance than we once thought that they were or would be. We pass by the mantel, or perhaps trek up the stairs where the eyes peering out of the photos on the walls haunt our memories with thoughts of better days. Perhaps they are the eyes of our children, the husband long departed in a years-ago divorce.

I am most certain that every single woman in today’s world has known love or at least infatuation at one time or another. In The Lonely Passion of Judith Hearne, Judith never had the opportunity to fall in love with anyone, while caring for her ailing aunt until the old woman died, leaving Judith with nothing. Judith was a 40-something year old spinster. Judith didn’t really have a choice in the matter; however, today women choose it. We are choosing spinsterhood over marriage at a rapid rate.

Several times every year, I am asked, why didn’t I get married. I suppose I have my reasons that are probably just as different or the same as any other who chose not to. Does that mean I will never get married? No, not at all, like Judith Hearne, I want someone who meets my intellectual needs just as much as other needs.  I learned something from my elders, particularly my grandparents who were married 63 years, once you reach a certain age, you have to enjoy each other’s company or you really don’t have anything.

I watched the documentary Revelations on Netflix, and I couldn’t agree more with the men who were interviewed. Marriage is about the relationship first, and about love second. Love is a by-product of marriage or civil union, or whatever suits your fancy in this regard. However, no matter how far you get into your spinsterhood, don’t ever stop believing in the magic of love.

You just never know. One day you might be at the laundromat or the grocery store, where a simple conversation leads to dinner, and then movies, or football games or whatever is in the spark that feeds the relationship and whispers…my dear, there is more, so much more.

Through literature, we learn to live, to love, and to conquer!

Posted by Unknown at 2:13 AM No comments:

Let Us Not Fall into a New and Darker Age 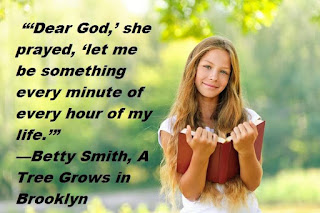 “Mother, I am young. Mother, I am just eighteen. I am strong. I will work hard, Mother. But I do not want this child to grow up just to work hard. What must I do, mother, what must I do to make a different world for her? How do I start?"
"The secret lies in the reading and the writing. You are able to read. Every day you must read one page from some good book to your child. Every day this must be until the child learns to read. Then she must read every day, I know this is the secret”
― Betty Smith, A Tree Grows in Brooklyn

Throughout history the most common means of controlling the masses is to keep them ignorant. The best way to keep people ignorant is to prevent them from being able to read and write; in any language. If people cannot read or write, they must depend on those who can to tell them what is, or what isn’t.

In A Tree Grows in Brooklyn, Katie begs of her mother to tell her the secret of preventing her child from living a life of poverty, to which her mother responds, “The secret is in the reading and the writing.” She goes on to explain that she herself is ignorant to reading and writing, but Katie can read, and she must ensure that Francie is also able to read and write, and as a byproduct be able to think for herself.

As time goes on in our world, I sit back and wonder about our own children. With a growing preference for videos and movies, and all things that hold their attention for thirty seconds or less, I wonder. Will they be able to succeed in a world where the United States is ranking lower and lower on the education scales worldwide? There are third world countries that rank higher than we do. Will our children have the ability to think for themselves?

Katie’s mother came from the old country, Ireland. She came from a time when she did not have a need for reading and writing. However, in her wisdom, she recognized that in this new country, her children would need to know this skill. They would not succeed without it. They would not achieve anything great or even live a decent life.

There is no difference between now and then. Children who cannot read do not develop critical thinking skills, they lack the imagination necessary for innovative thinking, and they cannot comprehend simple mathematical story problems. Reading is the foundation of education in every respect. This applies to more than recognizing words. One must know what the word means in every context in which it is used. This is taught through reading and built upon through writing.

We are at a critical turning point in our own living history. The debate rages on whether or not we should continue to teach cursive writing, without regard to the fact that the original historical national documents are written in cursive. Who will tell the young what the Constitution or Declaration of Independence says? Will the children be forced to depend on others to tell them? There is a certain danger in this.

When I taught classes on personal financial literacy and employment readiness, I concluded that there are two keys to socio-economic success: 1) understanding money management; and 2) education. Without the ability to read, an individual has no chance to master either.
I am a strong proponent of child and adult literacy. In a global society we must be able to communicate in the written word, lest we fall to a new and darker age than we have ever known before.

There are many lessons to be learned in A Tree Grows in Brooklyn, but none greater than the fundamental truth: “The secret is in the reading and the writing.”

Through literature we learn to live, to love, and to conquer!
Posted by Unknown at 4:56 AM No comments: